Yesterday I wrote about automating default browser switching and mentioned that I use LaunchBar mostly out of habit.

Since I’m interested in automating more stuff, I wanted to give Alfred a shot before I went all-in and made a bunch of LaunchBar actions that would be a pain in the ass to port later.

One problem out of the gate was that it didn’t play nice with one of my complex Karabiner modifications. I have it set up so when I tap Return, that inserts a \n, but when I hold Return, that acts as the Control modifier.

This has always been a little janky and there are a bunch of applications that interact weird with this, enough that I have multiple Karabiner profiles set up so I can turn it off with a few clicks. With the modification turned on, Alfred wouldn’t actually launch the things I was pressing Return on, it would always act as if I tapped Control.

Running commands is too fundamental to my workflow to have to fiddle around with switching keyboard profiles every time I want to do something. “Hold Return For Control”, we’ve had a good run together but this was the last straw. I switched my right option key to control instead so I still have a control key on the right side.

Maybe it’s obvious since I’ve spent 3 paragraphs talking about Control keys, but I’m a recovering Emacs user. I use VS Code now, but after over a decade and a half my brain is irreversibly poisoned to the point where I need to get as close to the right keybindings as possible, so I spend 85% of my waking hours holding down a Control key and my pinkies are gonna fall clean off my body sometime in the next few years.

Anyway with Alfred actually doing the main thing it’s designed to do, the next thing I needed to fix was fuzzy matching. I’m used to being able to type, for example, ff for Firefox. Out of the box, Alfred’s fuzzy matching is more strict and requires consecutive matching until either space or capital—if it was “FireFox”, ff would work, but since it’s not it doesn’t.

Fortunately there’s an option for that! Changing the option from “fuzzy capital letters” to “fuzzy match from word boundary” solved the issue. Before I found that option I’d started making some simple workflows for each alias I needed. 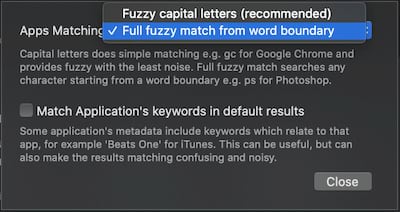 Making workflows in Alfred is a bit more clicking than I might like, but otherwise it’s dead simple.

Aside: I’m working on a music player

I’m casually working on a music player and I’ve been meaning to experiment with MPD to use as a backend. It’s a client/server model music player, so you start up the daemon and can connect different clients do it.

What I have prototyped so far is an electron app and for audio playing I’m doing the simplest thing I could think of, which is dynamically jamming things into an <audio> tag. It pretty much works (and I get media key support for free!) but there are a few things that are starting to annoy me.

The things I want to experiment with most are UIs and music metadata; I kinda don’t want to fuck around with how I get the wiggly air to come out of my headphones. MPD seems like a real solid option.

Making an MPD interface out of Alfred workflows

There’s a reference command line app for controlling MPD called mpc. It maps pretty closely to the MPD TCP protocol, mpc <command> <options>, and the output is easy to parse when necessary, so I figured to test both Alfred workflows and MPD, I could write a handful of shell scripts and create an interface of sorts for playing albums. 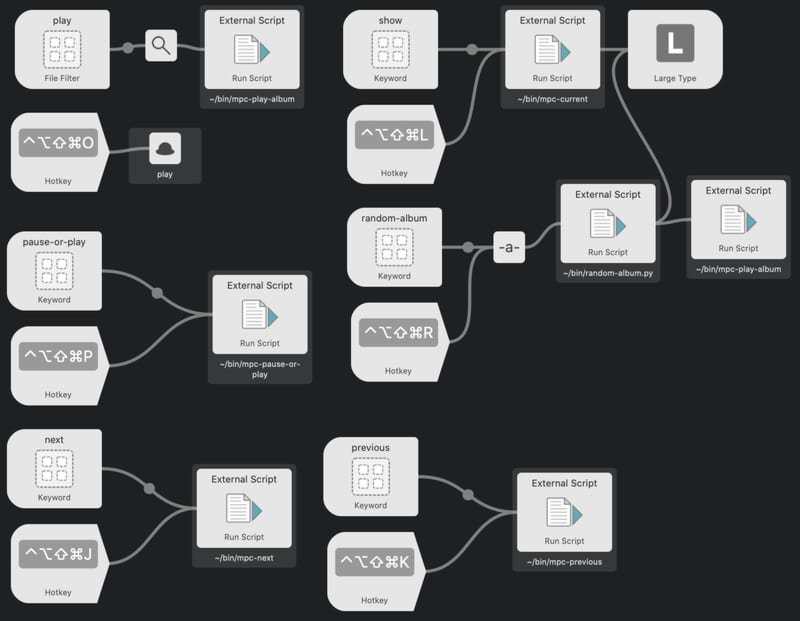 Most of those shell scripts are one-line proxies to the relevant mpc command, but some of them require a few more steps. Here’s mpc-play-album:

MPD doesn’t watch directories for changes, so it has to be told when to update the local database. I don’t want to ever have to actually remember to do this when I buy new records, so I made it part of the play command. update is incremental so it’s fairly quick, less than a second.

I organize my music in a 1-layer folder hierarchy (<artist> - album>/<songs>) so I have the Alfred play keyword set up to scan the list of folders in my music directory, then it pipes whatever selection I make to a utility action that strips off the leading filesystem prefix (~/Dropbox/Music/) so it can be passed directly to mpc add. 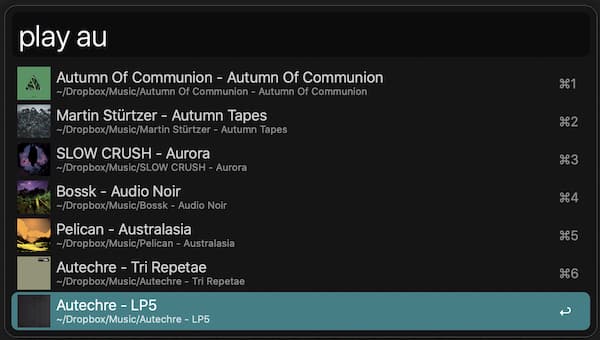 Let’s look at one more action.

This one is mpc-previous. Originally it was a straight proxy to mpc prev, but something felt off when I was using it. It took me a bit to realize it broke a convention I’ve grown used to: the action of ⏮ buttons on a lot of music players is state-dependent.

Once I made that change, using the previous action felt a lot more natural.

Those keybindings are gnarly

All the actions in the workflow can be triggered by keyword commands as well as keyboard shortcuts that look absolutely stupid to press.

There’s this untapped layer of possibility hiding within fn key and I really wanted to take advantage of that. Unfortunately Alfred doesn’t let me bind things to fn-<key>. You know what does though? BetterTouchTool.

I already use BetterTouchTool for a bunch of other things, including a lot of global key rebinds. I figured what I could do is set up those shortcuts that require clawing up my hand to press every modifier, which ensures I’d never hit them by accident or have them bound to something already, then use BTT to rebind fn-<key> to Control+Option+Shift+Command+<key>.

This worked out great: now I can hit fn-j to skip the current song or fn-r to load up a random album.

The one other point that was make-or-break for me was clipboard history management and it works just fine. I’m just starting to mess around with auto-expanding snippets, but I’m not sure how useful they are gonna be yet. A lot of the area where I need snippets are context-dependent when programming and I already have VS Code snippets for that. I’ll try to keep my mind open for other potential uses I might be overlooking.

I’m also gonna stick with MPD, at least for now

For now I’m happy to offload the actual “make sounds happen” part to MPD and focus on the music selection UI and UX. I do eventually want to have something that can stand alone without requiring folks to install and configure MPD because it’s definitely not straightforward for people who aren’t terminal savvy.