Nothing - The Great Dismal

I got into Nothing because of the Relapse Sampler 2019. They have a cover of Heavy Water/I’d Rather Be Sleeping by Grouper, from the album Dragging a Dead Deer Up A Hill which is also excellent. That cover caught my ear and made me look for more of their stuff.

Turns out they are great, even if the album cover for their last album freaks me out.

Vera up for adoption

She’s up on petfinder.com!

I have no idea how to describe a cat in a way that makes people want to adopt. And there’s no way to get feedback—I can’t ask people who respond to the ad like “hey what was it about that cat bio that made you interested?”

Without that feedback loop, I have no idea if I’m actually doing a good job or if people are just going by the fact that some cats are cuter than others and I could write “it’s a cat wtf else do you want?”

Scheduling instead of TODO lists?

I skimmed an article (on my phone, while lying in bed and I cant find the link now) that had a general thesis of “todo lists are trash and distracting, instead you should schedule your time”.

There are two things my broken brain relates this to:

update 2022-02-17: this isn’t how stuff works anymore, but I’m leaving it here for sake of historical accuracy

How I did it

I’m using commonmark-java so I could write an extension to handle this. That’d probably give the best performance.

But I don’t want to write a commonmark-java extension, I want to turn people into dinosaurs write FastParse parsers.

So instead of writing an extension, I wrote a parser that extracts any fenced code block, runs it through pygmentize and replaces the fenced block with output. Since markdown is a superset of HTML, I figured this would work just fine.

And it kinda did. But the indentation wasn’t quite right. Turns out commonmark-java doesn’t do a great job of maintaining whitespace of <pre> blocks that have a lot of tags in them. Bummer.

So what I did next was use the same parser but instead of replacing with pygmentize output, I replace with a construct that commonmark won’t mess up ([[{{<language>:<base64(body)>}}]]) and put that back into the markdown. Then I render the markdown, and use another parser that extracts that construct and replaces it with the pygmentize output. 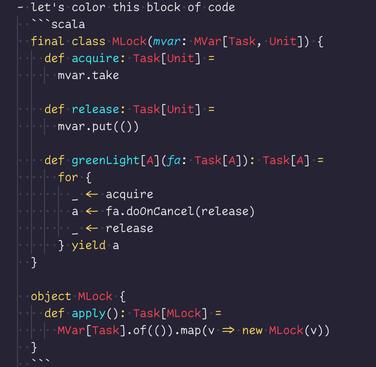 Notice how there’s indentation before every line of the code block? I don’t want that in the final output, I want the margin stripped. Unfortunately Scala’s stripMargin doesn’t really help here because it requires the margin to be pre-annotated with leading pipes |.

Welp, I guess I’ll just write my own!

This not my favorite code, but whatever it works.

If I wrote a commonmark-java extension, I’d be able to get away with a single pass. Since I’m doing this wacky pre/post processing business, each markdown file gets three passes. Does that actually matter in practice? Are the performance police going to come take away my computer card?

Nah not really. This is for a command line static site generator, not a hot code path in a web server getting 1000s of hits a second. I’m not gonna fire myself if I spend a few extra milliseconds (if that) per markdown file the 1 or 2 times a day I generate this site!